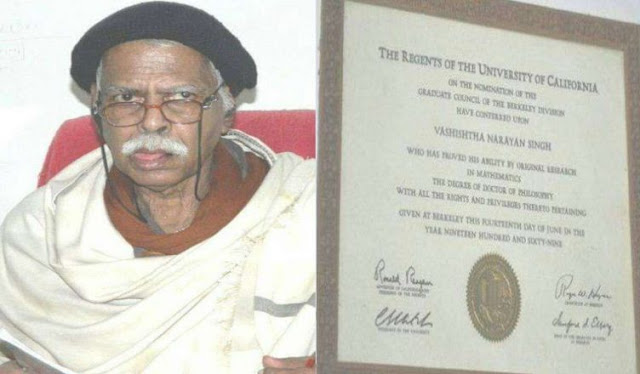 Vashistha Narayan Singh, the great mathematician of the whole world, was a person on whom the whole of Bihar is proud. Because he achieved great achievements in his life time, but the poor system of the government darkened his life.

According to the information received, there was a time in the life of Vashistha Narayan Singh where he used to work in the space agency NASA, while there was a time where he spent many years of his life in oblivion. He left the job of NASA for his country.

Let us tell that Mathematician Vashistha Narayan Singh challenged the great scientist Einstein's theory of relativity. It is said about him that when 31 computers were shut down for some time before the launch of Apollo in NASA, his calculations and computers were the same when the computer was fixed. This surprised all the NASA scientists.

Vashisht Narayan Singh started his studies from Government School of Bihar Board and graduated from Patna Science College. After this he went to America and got a PhD degree from the University of California. He is a source of inspiration for the people of Bihar even today.